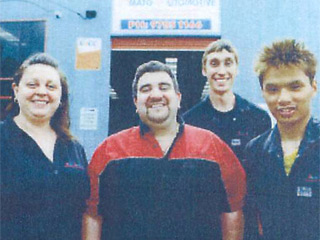 At the young age of 12 Adrian Amato always had known what he wanted to do with his life. The dream of working with cars consumed his every whim, as his passion never faltered during his adolescence or into his early adulthood.

Adrian’s enthusiasm for cars was apparent through his hard work and attention to detail, and in 1996, Adrian received recognition from his peers by being awarded with Apprentice of the Year.

Never shy of a challenge, this young apprentice decided to fully rebuild his Holden HQ. At just 19 years of age, this was clearly no easy feat; however this act of passion proved testament to Adrian’s character as a perfectionist.

The experience gained from Adrian’s employment at a local dealership gave him the confidence to build a foundation that later became Amato Automotive.

In December, 2003 Adrian’s dream became a reality. Since then Adrian and his wife Michelle have managed to create a family business renowned for its professionalism and highly regarded customer service.

The atmosphere within Amato Automotive as a family business has not only extended itself to their loyal customers, but also been cemented with the arrival of their first born son Aidan in 2008 and their little girl Imogen in 2009.